Why I hate to be called a minority

The news about Delhi’s Jamia Millia Islamia being granted “Minority status” (22nd Feb. 2011) has been celebrated by many, including the daily newspapers, as a kind of happy news that gives the Muslims their “due justice.” Some of Jamia’s teachers and staff members even distributed sweets to mark this announcement, which would basically ensure Jamia to have 50% seats reserved for Muslims. But I, having been born and lived all my life near Jamia Millia and studied here, do not support this minority tag and would like to put across my views, even though I know that the lobby in favour of this special status is far stronger than I can even imagine.
I believe that the demand for the minority status only shows the insecurity of the Muslims. If its main aim is to uplift the community from its backwardness, it is only going to push the Muslims into a deeper ghetto since an inclusive growth I believe is only possible with an eclectic diversity of students and staff. Secondly, Jamia already has enough of a “Muslim” character and does not need any extra legal status to ensure it. I present the following arguments to explain my views:
I think it is the insecurity of the Muslim community that needs to be addressed here rather than their “need” for reservation. Their fear is that as they are being victimised elsewhere in the country due to communal biases and violence, their institutions will also be slowly filled with non-Muslims usurping the already shrunk spaces available for them. This fear may be true to some extent (although it’s true for all institutions and communities). But will accepting mostly Muslim teachers and students in Jamia not prevent the entry of bright students and teachers of other communities, whose presence may actually help in the creation of a more progressive and competitive atmosphere that is good for the Muslims in the long run? This is the key factor for which I think a minority tag and reservation will harm the Muslims more than benefit. An interaction and exposure with wider diversity of people is good not only for the success of their material careers but also for the reduction of communal biases and sense of victimization. We have already had enough of this Minority tag, and need to grow out of it now. But I know that my views will not only be ignored by the Muslim supporters of this tag but also by the deciding authorities for whom consoling the short-term Muslim anxieties is more important (for their votebanks) than a comprehensive development of the community.
An abridged version of this article appeared in Hindustan Times, New Delhi, 28 Feb. 2011, as "Let some fresh air in."
An Urdu version of this article has appeared in Jadeed Mail of 25 Feb.2011. A scan of the page is given below. (Please click to see the full version). 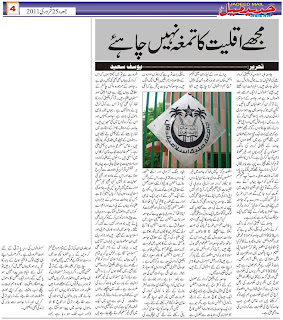 Also see this related article: Is the Muslim World in India Changing?
Posted by ysaeed at 5:23 AM